Not Aardman's best but good return to stop-motion. 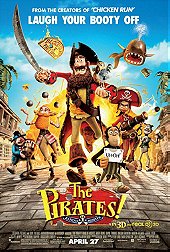 Following Aardman Animations’ most notable triumphs, such as Wallace And Gromit, Chicken Run and most recently Arthur Christmas, they make their latest motion picture in their second consecutive collaboration with Sony Pictures Animations, but first stop-motion film in seven years. After the hilarious trailer and appearing to bring forth the charm, the jokes and the breath-taking stop-motion pieces that we’ve seen so often from Aardman in the past, expectations were exceedingly high. However, although The Pirates! Band Of Misfits (aka The Pirates! In An Adventure With Scientists), delivers with a fun story, great effects and voice portrayals from its stars, there was the vital lack of humorous jokes and emotional attachments between the characters and audience that became vital pieces missing from the film. Therefore, it became a minor disappointment.


Aardman Animations make their first film that isn’t of their own creation as The Pirates! Band Of Misfits/The Pirates! An Adventure With Scientists is based on the first two of a series of novels by Gideon Dafoe. Aardman co-founder Peter Lord co-directs his second feature film in 12 years, after Chicken Run and successfully embarks us on another wacky adventure. However, it was that the film as a whole did not appear as funny nor make the audience feel as emotionally connected as what we have experienced before. Nevertheless, Aardman still provide jaw-dropping stop-motion effects, successfully capturing the accuracy of voice roles with the clay-animated characters and the stunning background designs. Gideon Dafoe writes the script based on his own novels, which gives the film a fair advantage regarding dialogue.


Another reason why Aardman Animations have been so successful is that throughout their five feature films thus far, they have collaborated and worked with a wide range of talented actors, who have been particularly British. Hugh Grant stars in his very first animated feature role as the Pirate Captain with an eccentric but remarkable performance, like Johnny Depp as ‘Captain’ Jack Sparrow in the Pirates Of The Caribbean series. However, the Pirate Captain expresses an occasionally cowardly and rather clumsy nature like Jack, but he is actually a well-intentioned and rather kind character who respects his crew, which isn’t really what we see from pirates in any film. In addition, none of these pirates have official names. To the audience, their known names are either how they’re described or their profession.


Martin Freeman portrays the Pirate Captain’s right-hand-man The Pirate With The Scarf in his very first animated feature role too as he gives another good performance. Due to the well-established connection between Grant and Freeman as their characters, their voice-role debuts have gone off to a flying start and we need to hear them again in other upcoming projects. Alongside Grant and Freeman is a group of supporting actors portraying notable historical figures from the 19th century, aka the Victorian Era. Firstly, David Tennant portrays English naturalist Charles Darwin. Considering that Tennant’s voice acting was decent, Aardman and Dafoe did toy around a little bit with Darwin’s character about where his true loyalties lie. Nevertheless, it is an accurately animated representation of the late Darwin. Furthermore, there’s the Queen Victoria herself, portrayed by Imelda Staunton. Victoria doesn’t surpass the sinister and scheming nature of Miranda Richardson’s role as Mrs. Tweedy in Chicken Run, but the character of Queen Victoria expresses the greed of the power given to her. It was the unorthodox idea of these historical figures being transformed into comical and rather unrealistic characters that both made them successful but lame at the same time.


Overall, The Pirates! Band Of Misfits aka The Pirates! In An Adventure With Scientists is another successful film from Aardman Animations but due to the lack of humour, it does not quite show precisely what they are capable of achieving at their highest level. It is not like Wallace And Gromit or Chicken Run, but it is a solid enough return to stop-motion features for Aardman that is still a fun and exciting film with dazzling effects and will charm its audience in both 3D and 2D.