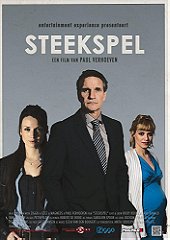 Since I saw recently ‘Benedetta’, I was quite eager to see the only directorial effort from Paul Verhoeven that I haven’t seen so far. After almost 10 years, I just gave up waiting for the damned thing to show up on a Dutch TV-channel (for the record, I leave in the Netherlands…) and I bought instead a (probably too expansive) German DVD. Back then, even though Verhoeven made a triumphant come-back in the Netherlands with ‘Zwartboek’, it seems that he struggled afterwards to get another project started in the Netherlands. As a result, he got involved in some kind of experimental project during which the audience was somehow involved in the writing of the script. Even though they provided a making-off before the movie itself and even though I read some stuff about this project on the internet, it is still rather obscure how it was supposed to work. Coming back on the making-off, even if it was neat to see Verhoeven at work, it didn’t have much value though. Indeed, you get to see the Dutch master claiming that it was a great creative experience and, even though he did admit that it turned out to be more challenging than he expected, he never went further than this. On top of that, I have read here and there that he more or less completely changed the whole concept along the way because it didn’t work at all and, even so, I really doubt he was satisfied by the end-result. Concerning the movie itself, even though Verhoeven praised his crew and the actors during the making-off, I thought it was not much better than a really cheap Dutch made-for-TV movie. Indeed, it was visually nothing really thrilling or fancy and the acting was rather weak as well. In fact, the script was the only thing that did have some potential but, still, I didn’t care much about the choices made either by the audience or by Paul Verhoeven. In my opinion, they should have tried to keep the whole story taking place during the party at the beginning and the tone was just too light for my taste. Anyway, it is the proof that writing a movie is a really difficult task and we should probably let the professionals taking care of this in the future. To conclude, I didn’t care much for the damned thing which was pretty much a failed experiment and I think you can pretty much avoid it.