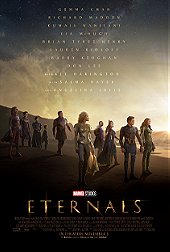 From all the MCU movies to be released this year, this one seemed to be the most interesting so I have to admit that I was rather curious about the damned thing. Indeed, how awesome it would have been that Chloé Zhao, after scoring a Best Picture Academy Award, would follow up with a massive blockbuster which would also turn out to be one of the most challenging MCU instalments ever made? So, I was really rooting for this movie but, to be honest, I'm afraid it turned out to be the most disappointing one from the whopping 4 MCU movies released this year (ok, I still have to watch the latest Spider-Man instalment but I think it should be fine). I mean, it’s not that it was bad, far from it, in fact, it did have quite some potential but this potential was unfortunately pretty much completely untapped. Indeed, this group of characters was quite intriguing and the fact that they lived for thousands of years could have opened so many doors, especially on a metaphysical level. Sure, they did scratch this idea but it was really superficial and, eventually, they were stuck facing the usual monsters threatening our planet. On top of that, within 5 mins, I had already figured out that Arishem had some ‘secret’ agenda and it was rather disappointing that, after thousands of years, these ancient seemingly wise characters didn’t figure this out on their own at some point. Eventually, it is rather disheartening that Chloé Zhao claimed that Marvel gave her plenty of freedom but I wish they gave her instead a better story to work with. Anyway, to conclude, in spite of its flaws, it was not a bad MCU instalment so it is still worth a look but there is no denying that it could have been so much better.