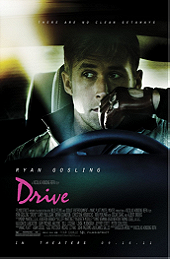 Warning: Spoilers
I should point out at the onset that this really isn't the sort of film I like--so keep this in mind. I decided to watch "Drive" because it received a lot of critical attention but was ignored at the Oscars. And, since I'd heard so much good stuff about it, I decided to rent it.

"Drive" is a SUPER-violent film. While the number of deaths isn't as extreme as some films, the deaths that do occur are among the bloodiest and closeup you will ever see in a movie. You see a person get their head blown apart at close range with a shotgun, you see a man stomped to death (complete with lots of squishy sound effects) and a guy stabbed in the eye and then in the throat! Do NOT let kids see this film and think twice about seeing it yourself. It is brutal...very, very brutal--and this might be why it didn't get any major Oscar nominations.

The film begins very well. I really liked the music and thought it quite fitting. Ryan Gosling plays a guy who is a spectacularly talented driver--so much that he does stunts for films and also drives getaway for crooks. I know the film makers were trying to make him super-cool by having him show ZERO emotion and talk rarely. I just thought this was too underplayed for my taste. As for the mobsters in the film, they are quite the opposite. Albert Brooks (yes, THAT Albert Brooks) plays a maniac killer--a guy who loves to use knives and razors on his victims. Ron Perlman isn't much nicer! Bryan Cranston is also on hand but never gets around to killing anyone.

When Gosling meets a nice lady (Cary Mulligan) and befriends her and her son, he learns she has a husband who is in jail. Instead of trying to steal her, he actually helps the guy when he gets out of jail. It seems that the mob is going to make the husband perform one last robbery--then they'll let him and his family live--and Gosling agrees to drive the getaway car. But it all blows up in their face--it's all a setup and it looks like EVERYONE will eventually die. Can the almost zombie-like Gosling manage to take on the gang and survive?

I personally respect the film but thought it was way too over-mannered and way too artsy for my taste--as well as WAY too bloody. If this if your thing, fine. I just didn't enjoy this sort of thing though it's well made.