Review of The Deer Hunter 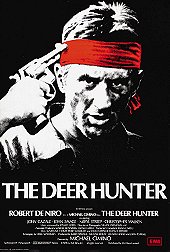 When this movie was released. The popular joke was. I went to see The Deer Hunter in the cinemas, three hours in and nothing happened. There was still another four hours left!

When you find yourself watching a movie where Christopher Walken is playing the most normal character at the start, you know you will be heading to some difficult places.

It is obvious that Director Michael Cimino was obsessed with The Godfather. The Deer Hunter has a long segment featuring a wedding at the start of the movie. The characters are of Russian heritage instead of Italian. Two of the main cast were in The Godfather films.

The wedding scene is used to establish the Pennsylvania steel mill community and the three friends. Mike Vronsky (Robert De Niro) is a bit of a loner and a hot head. Steven Pushkov (John Savage) is the young man who is getting married. Nick Chevotarevich (Christopher Walken) is the warm hearted one that everyone likes. He is going out with Linda (Meryl Streep) a woman that Mike also has his eye on.

All three men are due to go to Vietnam. When they get there, all three will be captured by the Vietcong and face traumas that will change their lives.

Surprisingly the Vietnam combat scenes are brief. There is the famous shot of De Niro with a flamethrower. More infamous is Cimino portraying the Vietcong as savages. One soldier throws a grenade in a bunker with women and children inside.

The film was controversial at the time due to the Russian roulette scenes. It is apparent that this is a metaphor for the madness of war and the mental damage of the characters.

Cimino wanted to make a modern epic and he succeeded. The film won the best picture Oscar. The authorship of the movie was mired in contention. It has four credited writers and this contributed to the choppiness in the story when the film moves to Vietnam and onwards from there.

Like Apocalypse Now which would be released a year later. The Deer Hunter is not strongly anti war even though the characters are damaged by their time in Vietnam. This could be due to the fact the Vietnam war only ended four years earlier. It was still a raw wound. It was not until Oliver Stone's Platoon when the Vietnam war was shown in a more critical light and only because Stone fought in the war.

The treatment of the Vietnamese is racism on the level of native American tribes in many of those old westerns where they were stock villains. The accusation of racism followed Cimino when he made Year of the Dragon in 1985.

There were some flaws in the story. It was never clear why the three joined up especially as Mike and Nick are older characters.

How did Nick know that Steven was in a veteran hospital when Mike had difficulties finding this out. This looks like a flaw further compounded when Mike next sees Nick. By this time Nick has totally metamorphosised who does even acknowledge Mike.

I watched The Deer Hunter as a teenager, I managed to rent it on video when I was not yet old enough for an 18 rated film. I should not had bothered, it premiered on television two months later. I watched it again over 30 years later with a cleaned up print.

It does stands up well. There was a lot of detail in the Pennsylvania scenes, the extensive use of location shooting. Actors hungry for a meaty script. What a difference in De Niro from here to Dirty Grandpa.

One of the weak link was the shallow use of female characters, two of them are literal punchbags. Dare I say it, maybe another actor could had played Stan. I noticed in my first viewing John Cazale looked gaunt and slightly different from the Godfather films. Now watching him in the knowledge that he died before the film was released, he just does not look well and was also too old to be in the main characters close circle of friends.