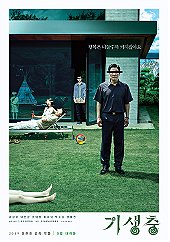 Warning: Spoilers
The title is a metaphor to describe the relationship between the rich and the poor. It is a social statement. We are first introduced to the poor Kim family who is street smart. They steal wi-fi and put together pizza boxes. Kevin (Woo-sik Choi ) is introduced to the rich gullible Kim family as an English tutor. He manages through lies to get the rest of his family hired on as the old servants are dismissed. We discover poor people have a disgusting smell to them. They smell like the subway (urine?) The film climaxes ar a birthday party.

The film was mildly amusing and clever. It wasn't as funny or entertaining as say, "Once Upon a Time in Hollywood." While good, I would say the Oscar as "best picture" was a gift.