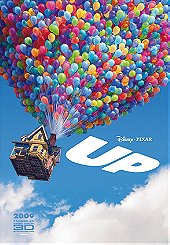 Young Carl idolised explorer Charles Muntz (who somehow looks a lot like Kirk Douglas) and his discovery of Paradise Falls somewhere in South America. Others regarded him as a quack and a fake, so Muntz disappeared.

Carl wanted to be an adventurer, he met young Ellie who was even more adventurous but real life got in the way. Now Ellie has passed and Carl is a grumpy old man living alone, hounded by property developers who are bull dozing the neighbourhood and want to see him in a retirement home.

Carl has tied his house with loads of helium balloons to float to Paradise Falls. He manages to take with him, an unwitting boy scout Russell who was just helping out an elderly person for a badge.

Both find adventures including a rare bird, talking dogs and a fallen hero. More importantly Carl finds a yearning for life as he hangs out with young Russell who himself is freindless.

I ended up viewing this film as my wife took our kids to the cinema to watch this and upon her return she told me that I would end being like Carl went I am older. I guess it is a roundabout way of telling me that I am a grouch!

The film starts with a segment of Carl and Ellie from childhood to old age. It is the junior Carl who is shy, slightly awkward, a pace or two behind the frenetic and energetic Ellie. As life goes on, they could not have children and it is Ellie who slows down as they get older and she passes on, leaving Carl on his own.

It is all about Carl rediscovering that zest for life and having that adventure he and Ellie dreamt about all those years ago. This is a fun and imaginative film, slightly surreal and off beat. For a film called UP it actually keeps its feet on the ground in terms of story and emotion.