Review of The Green Mile 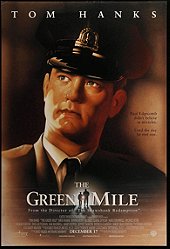 Warning: Spoilers
"The Green Mile" is an American movie from 1999, so this one will have its 20th anniversary 2 years from now when I write this review (2017). Let me start by saying that this film runs for over 3 hours, so if very long films aren't your preferred choice, then you can skip it. It's okay, but you are really missing out in that case. The film is based on a novel by Stephen King and the writer is Frank Darabont who launched his career with Stephen King's works and kept going with adaptations for quite a while. Another would obviously be "The Shawshank Redemption", the film he made before this one here. Today, Darabont is probably mostly known for his work on "The Walking Dead", which is truly ironic looking at how wonderful his works in the 1990s were. As for this one here, I am definitely a bit biased as the cast includes many actors I quite like. This applies not just to lead actor Tom Hanks, but also to Rockwell, Morse, Cromwell and Sinise, even if the latter only has a very brief appearance. And how can you not like Michael Jeter and Michael Clarke Duncan after their performances in here. May they rest in peace. MCD is the only one who scored an Oscar nomination from the cast and this is also his career/life-defining performance for sure. The movie itself was nominated for four Oscars, but did not win any sadly.

I think that it may be difficult at times to appreciate the fantasy aspects in this film and with that i am referring mostly to the healing scenes. The film otherwise relies on very dark, very gritty and realistic plot developments because after all the entire thing takes place at a Death Row prison. But maybe it is this contrast between evil and goodness that lets it work so well. There were honestly more than just a few scenes and moments when I felt that they will really struggle to make this work, but they did succeed every time. Another example would be the frame between start and ending that plays many decades after the events at the prison, but when the closing credits rolled in I was very touched. I would also like to say that the film despite its massive runtime never drags a bit. It is truly easy to care for the characters and wonder what is going to happen next to them and this includes the good ones as well as the bad ones and there are good and bad ones at both sides of the law in here. The prime example is of course Doug Hutchinson's character, who is a bit of a main antagonist next to Rockwell certainly. It's a bit of a shame that the former did not really manage a great career and that people instead talked about nothing but his personal relationships. He was so good in here.

I also do believe that another huge strength of the film is the location, namely the prison. There is always an aura of imprisonment and narrowness surrounding this film, also when it comes to the guards. And I personally felt that the film always got a bit weaker for a moment when the action moved outside the prison, like the scene with Clarkson's character or the big jump forward in time. But maybe that's just me. The location is truly special in terms of the overall plot in here. The most heartbreaking moments are the execution scenes, the one with MCD's character, but also the one with Jeter's character. That one was painfully good and you could not watch anywhere else, even if your heart was breaking during it. It was basically a longer more intense version of the rodent-killing scene from right before that. Or maybe I should say "killing". So yeah, for me this was an outstanding movie and I believe everybody needs to see it. Then again, looking at the number of ratings this film has here on IMDb, almost everybody has seen it and the few who have not really need to change that as soon as possible. This film is a masterpiece and a definite contender for best film from the year 2009 (the decade sure went out on a strong note) and also for Top10 of the 1990s. What are you waiting for? Don't be scared of the duration. Be grateful it is so long because it is good from start to finish. Also a contender for best film of Tom Hanks' career and that means quite something. (Re-)Watch it!