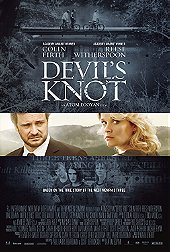 To be honest, since this movie had been rather poorly received, I had some rather low expectations but since I have a weak for Reese Witherspoon and since it was directed by Atom Egoyan, I still wanted to check it out. Unfortunately, even if it was an interesting true story, the movie turned out to be seriously weak though. I have to admit that I wasn't really familiar with the West Memphis Three case before watching this movie but I think it might have been a blessing since it did help me to slightly more appreciate this movie, at least, more than it actually deserved. However, it didn't change the fact that, even though Egoyan had a rather solid track record back in the 90's, the directing was here actually seriously clunky. Indeed, even though the whole thing should have been about the investigation on both sides (how the cops tried to pin these murders on these 3 teenagers without a single shred of physical evidence and how their lawyers tried to prove that there was no merit in these accusations) which seemed to be a no-brainer to me, instead, they kept focusing on Reese Witherspoon's character who, well, pretty much did nothing through the whole thing. I mean, sure, it must have been awful for the parents of the deceased kids but if this woman didn't have anything relevant to say or to do regarding this case, except being played by a A-lister, well, I wish they put their focus on something more interesting. Concerning Colin Firth's character, he did seem at first to be more promising but it didn't last long, I'm afraid. Of course, there was the fact that Firth was probably completely miscast to play an American with a southern accent but it didn't really bother me after all. What bothered me even more was the fact that, except making some moralistic statement about the death penalty, the guy didn't do much after all. Seriously, it would be fun to count how many meaningless close ups you get on these two characters. Anyway, to conclude, even if it was a strong story, this movie was just really weak and you would be wise to watch instead the many heralded documentaries about this topic.