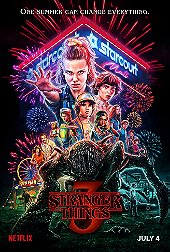 Having heard nearly nothing but good, actually great, things about 'Stranger Things', despite it attracting some criticism (like a lot of popular shows do these days, interest was high watching it. Due to being so intrigued by its concept and various ideas and tones.

'Stranger Things' on the most part is deserving of the love it has, for me its lack of originality was not a problem because it executes so much of everything else so wonderfully. It is not perfect and not an even in quality show, but when it was good, as shown in a quite excellent first season, boy was it more than great. Along with 'The Crown' and 'House of Cards' in its prime, 'Stranger Things' is one of the best Netflix has done and in well above their general standard.

Do agree absolutely that Season 2 is not near as good as Season 1. There are still a lot of elements present in Season 2 that was especially good about the first season and part of the show's appeal, but somehow the writing didn't always feel as tight, focused or rounded and some of it was a bit forced and obvious.

Also felt some of the effects weren't as refined either. While the acting is great from almost all the cast, Winona Ryder's melodramatic over-acting did feel at odds with everything else.

Everything else is executed so well. A vast majority of the time, apart from the lack of refinement of some of the effect in the second season, the production values are just great. Very stylish and atmospheric, with some truly beautiful images that one can't believe such high quality comes from a Netflix show. The music is haunting and nostalgic.

Writing is thought probing and has a lot of brains and heart, with some nice gentle humour that doesn't overpower, some truly poignant drama and tension. The story is rich in atmosphere and even though the story ideas are not original and have been understandably described as derivative, it's the execution and telling of these ideas that makes one look past that. The suspenseful mystery elements, the inventive and intriguing sci-fi elements and dark and disturbing horror elements are beautifully balanced and handled adeptly on their own. With an emotional core and nostalgic homages added as well.

Characters are compelling and it's the chemistry and interaction and how the relationships are written that makes 'Stranger Things' work so well. Excepting Ryder, the acting is terrific. The standouts being Finn Wolfhard and particularly Millie Bobby Brown (such an expressive actress in a beyond-her-years subtle way), if they continue to act this way and be wise with their career choices they are very likely to have big careers.

Overall, very good show and at its best excellent. Do wish that Season 2 was as good as the first though. 8/10 Bethany Cox