It's a Wonderful Life review
25 Views
0

Review of It's a Wonderful Life 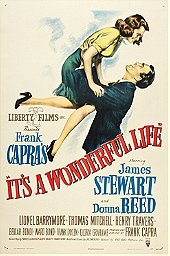 This is a very good movie. Period. A "classic", I don't think so. This is a movie whose actual quality has been exceeded by its hype--though NOT because the producers or actors hyped it (like the typical overblown and over-hyped Hollywood film). In fact, when it was released it was not particularly successful (especially compared to other Frank Capra flicks).

No, instead it reached legendary status for TWO reasons alone. It was a public domain video (hence NO ROYALTIES REQUIRED FOR SHOWING IT) AND its setting for the movie's conclusion was the holiday season. These two factors worked together to BLITZ the American public from the 1980s to the late 90s (until its copyright status was restored). I remember these dark days, when It's A Wonderful Life was literally shown on half a dozen channels at the same time!! Not even GREAT movies should be shown that much! As a result, many began proclaiming it a classic while some others got awfully tired of seeing it--which is a shame because it's a very good film.