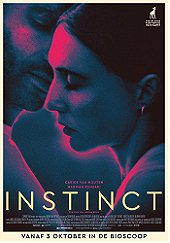 I wasn’t really sure what to expect from this flick but since I have a weak spot for Carice van Houten, I thought I might as well check it out. Well, unfortunately, even though the material was super interesting, to be honest, the damned thing turned to be rather half-baked, I’m afraid. Indeed, it was quite fascinating to spend some time in a TBS facility (in the Dutch Judicial system, it is possible, when a judge is convinced that the suspect, at the time of the offence, was suffering from a defective development or pathological disturbance of the mental faculties, that the suspect get interned in a jail functioning as a psychiatric hospital instead of a regular jail). However, it was just too murky what Halina Reijn was trying to achieve with her directorial debut. On the other hand, the poster seemed to be pretty obvious, but, whatever was her point, it took just too damned long to get there. I guess that the main idea was to show that relationships, especially romantic ones, can be really complex, even really messed-up, and that love can happen in the most unlikely and unhealthy ways. The problem, mostly with Nicoline (played by Carice van Houten) was that they never displayed her in another professional context during which was she was actually fully functioning. As a result, there was no point of reference to compare with what she was going through during this movie. With Idris (played by Marwan Kenzari), it was less problematic but his mohawk was a rather heavy-handed way to show that the guy was ‘trouble’ and I wonder if his character wouldn’t have been more intriguing without it. Anyway, to conclude, it’s too bad the whole thing turned out to be rather empty and pretentious but the material was still pretty strong and, in spite of its flaws, it still think it is worth a look.