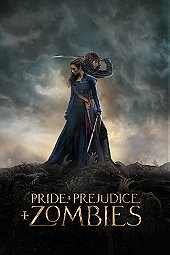 To be honest, I wasn’t really sure what to expect from this flick but since I have a weak spot for Lily James, I thought I might as well check it out. Well, it did sound like a really weird mash-up and I remember that there was a pretty good buzz around it before it got released. However, I’m not surprised that it turned out to be a flop after all. Indeed, I don’t think that zombie fans were really eager to have their beloved monsters get stuck in the middle of some stuffy vintage romantic intrigues and, the other way around, I don’t think that Jane Austen fans would be happy to have some ghoulish monsters randomly popping up in the middle of some romantic encounters involving Mr Darcy and Elizabeth Bennet. As a result, you might wonder who was supposed to be the audience for this flick. At least, it seems pretty obvious that the cast (Lily James, Sam Riley, Bella Heathcote, Suki Waterhouse, Douglas Booth, Charles Dance, Jack Huston, Lena Headey, Matt Smith) had quite some fun with this material and the whole thing looked pretty good but, to be honest, I thought it was just really boring. Basically, the only way it could have worked was if they would have gone for something completely wacky, I mean, wasn't it supposed to be the whole point from the very beginning? Unfortunately, instead, they gave us a rather weak version of ‘Pride and Prejudice’ combined with a rather weak zombie flick (the worst part was probably this rather inane sub-plot about the fact that the zombies could be somehow ‘tamed’ by eating some pig brains…) and this mix was just so tedious to behold. Anyway, to conclude, I just didn’t care for the damned thing at all and I don’t think it is really worth a look.