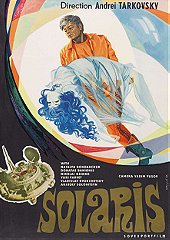 In fact, I actually saw first Steven Soderbergh’s version which had been a huge flop when it was released but it was ages ago and I didn’t remember much about it. Still, it was pretty neat that, after a WWII drama and a medieval epic, Tarkovsky was coming up with something completely different and again really ambitious. Anyway, as usual with this director, it turned out to be terribly challenging though but, at this point, I wouldn’t expect less from the Russian master. And, yet, even if it was pretty tough to watch, there was still something quite mesmerizing about the damned thing. In my opinion, it was some kind of reflection on the fact that we are, as a specie, terribly arrogant because we have been ruling this Earth for millenniums (we also ruined the damned thing by exploiting all its resources but that’s another story) but, in fact, we barely know ourselves after all. As a result, we would actually rather poorly equipped if we would encounter another kind of life form in some distant future. Indeed, in the vast majority of SF films, aliens are portrayed either as some human-eating monsters or as a superior life-form who actually are very similar to us and they always fit some logical frame corresponding with how we see ourselves and how we see life in general. However, as it was displayed in this movie, we would probably encounter something completely ‘different’. In fact, the gap between what we would expect and what we would actually get would be so huge that we would probably not have the mental and psychological capabilities to handle such an encounter. At least, that’s what I got from the damned thing but maybe Tarkovsky actually meant something completely different. Concerning the rest of the movie, well, I’m sorry, but it did feel like a very long and rather ugly episode of ‘The Twilight Zone’, to be honest. Anyway, to conclude, even if I’m not sure if I really understood this flick, there was still something fascinating about it and it is definitely worth a look, at least, if you like the genre.