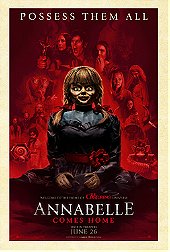 To be honest, I didn’t expect much from this sequel but, since it was available on Netflix, I thought I might as well check it out. Well, to be honest, pretty much like the previous sequel from this franchise, I have to admit that I was actually rather positively surprised by the damned thing. First of all, it was pretty neat to see again the charismatic Ed and Lorraine Warren, even if they were involved only at the beginning and at the very end.  Furthermore, unlike with the first instalment which turned out to be so underwhelming, once again, they didn’t focus so much on this evil doll which was a smart move. Instead, they explained that she was some kind of vessel or magnet for other spirits which was not a bad idea since it allowed the makers to unleash a whole bunch of ghosts, spirits and other demons in the Warrens' house. The downside was that it did make the whole thing seriously random. However, a bigger issue was that the whole setup didn’t make much sense whatsoever. Indeed, the Warrens had a room full of very evil and dangerous artifacts and what do they do when they go on a business trip? They leave this responsibility to an underaged baby-sitter… However, it actually got even worse. Indeed, Ed Warren actually LEFT the freaking keys to get to this room on his desk which was just completely unbelievable… Sure, I understand that they had to find a way to get Annabelle out of her closet but I wish they found something slightly more convincing. It was also rather bewildering how much the Warrens completely downplayed what happened when they got back home. Anyway, to conclude, in spite of its flaws, I still think it was actually a decent horror flick though and it is worth a look, at least, if you like the genre.