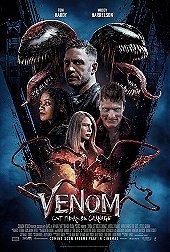 Even though the critics really hated it, I actually enjoyed ‘Venom’ so I still wanted to check this sequel out. Well, this time around, I’m afraid I would have to agree with the critics though. Indeed, even if I wasn’t expecting a masterpiece, it still turned out to be rather disappointing, I’m afraid. First of all, pretty much like with its predecessor, they came up with a rather weak story. Indeed, there was absolutely no link whatsoever between Eddie Broke and Cletus Kasady but, at least, the way Kasady became Carnage was not so bad. However, the biggest issue was with the relationship between Broke and Venom. Indeed, it was the biggest (only?) asset in the first movie and it was just hilarious to see them getting to know each other. Unfortunately, this time around, it was never really fun to see them because their relationship was completely bogged down by some seriously negative vibes. I mean, Venom needs Eddie because he is a perfect host and Eddie thanks to Venom is pretty much invincible so, at this point in this franchise, it would have been nice if they finally embraced this association. Unfortunately, it seemed to happen only at the very end of this movie and, instead, they got separated which was just a poor decision. Coming back on the ending, the end-credits scene turned out to be pretty much the best moment of the whole movie. Of course, many expected it but that Marvel actually did it was just really awesome. Furthermore, it is actually pretty impressive that, after the Infinity War/Endgame juggernaut, they still managed to up their game somehow and, by breaking the Multiverse, the possibilities are pretty much limitless, which is pretty exciting. Anyway, coming back to our main feature, to conclude, at least, with barely 90 minutes of running time, it was not too long like so many blockbusters nowadays but I wish they came up with something better for this really awesome character(s).