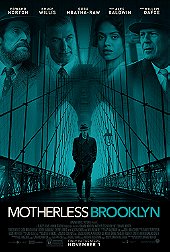 I wasn’t really sure what to expect from this flick but I have to admit that I was rather curious to see what Edward Norton would do with his 2nd directorial effort and, since it was available on Netflix, I thought I might as well check it out. Well, it turned out to be a decent neo-film noir but, to be honest, not much more than that. Still, Norton did get many things right though. Indeed, the mood was nice, the soundtrack was spot-on and it was definitely a bold move to have Bruce Willis playing the coolest character around and still get rid off him within the first 10 mins. The main issue was basically with the story. Indeed, like any film noir, it was fairly convoluted (seriously, even after 2.5 hrs, I still didn’t figure out the name of most of the characters involved) but I’m pretty sure they could have ended up with a similar result in 90 mins. Something that bothered me was also the fact that Lionel and his colleagues had no clue what was going on with their boss but I don’t think it really made much sense. Indeed, Moses Randolph (based on a guy who really did exist called Robert Moses who actually pretty much did everything depicted in this movie) was such a major figure in New York back in those days, his reputation should have preceded him, especially for such a team of seasoned private detectives. Concerning the cast, there was something slightly gimmicky about Edward Norton playing some guy with Tourette syndrome but that’s something Norton could pretty much do in his sleep and he was definitely convincing. Furthermore, discretion and subtlety are pretty much some required qualities for any half-decent gumshoe but it is also pretty much impossible for someone with this affliction and this clash was pretty neat. However, it happened too often that, during, some crucial moments, the whole Tourette thing was suddenly massively toned down or even completely disappeared, depending on the needs of the plot. Anyway, to conclude, in spite of its flaws, it was still a decent watch and it is worth a look, especially if you like the genre.