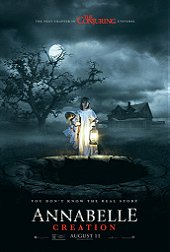 To be honest, since I didn’t care much about ‘Annabelle’, I didn’t have some huge expectations with this prequel but I thought I might as well check it out anyway. Well, even if it was maybe nothing really mind-blowing. at least, it was definitely an improvement on its predecessor. First of all, I think it was a sound decision to not rely too much on the doll this time around. Then, it was also a good idea to involve a whole bunch of young kids as well. As a result, most of the duration was about watching these young girls wandering at night in some creepy old house which wasn’t really original at all but, at least, it was effective. By the way, I discovered that the girl who played Janice, Talitha Bateman, was actually 16 years old when she shot this movie which was just quite surprising since she seemed to be so much younger. Anyway, of course, the whole point of this movie was to show where the hell the Annabelle doll was coming from but, in this area, it turned out to be only hardly satisfying though. Basically, the explanation they came up with was that the Mullins kept praying to whoever or whatever was listening so they could get in touch with their deceased daughter but, instead, they ended up with some demon haunting their house. The problem with this explanation was that it was just too random and, on top of that, what was the actual connection with the freaking doll?!? Seriously, they could have removed it and it wouldn’t have had any impact on the whole tale. Anyway, to conclude, even though the damned thing was rather generic, they still managed to make most of a seriously limited concept and I think it is actually worth a look, at least, if you really like the genre.