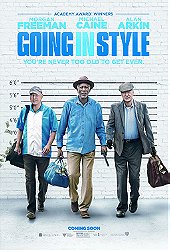 I wasn’t really expecting much from this flick but since there was a solid cast involved, I thought I might as well check it out anyway. In fact, since it was directed by Zach Braff, I should have been pretty excited by the damned thing since I really loved ‘Garden State’, his directorial debut but, to be honest, it turned out to be a rather decent feel-good feature but not much more than that, I’m afraid. Sure, I have to admit that I haven’t seen the original version directed by Martin Brest but I’m pretty sure this was just another useless remake. Above all, it didn’t seem to be such a brilliant story which required to be made other and other again and it seems rather sad that, by his 3rd directing effort, Braff already seemed to be running out of ideas. Anyway, I will have to admit that I do have a weak spot for the heist genre and it is always fun to see such a group of fine actors (Michael Caine, Morgan Freeman, Alan Arkin) trying to figure out how they would pull this off. Furthermore, there was something quite sweet and genuine about the relationship between these 3 men. Unfortunately, the tone of the whole thing was just too light (I can guess that Brest’s version was slightly darker or, at least, I hope so) and, above all, it really clashed with the fact that they were actually dealing with some serious real issues. In fact, it could have much more effective as a sad nostalgic black comedy instead of the cheerful misguided optimistic approach they gave us. Anyway, to conclusion, in spite of its flaws, I still think it was rather harmless and it might be worth a look, if you like the genre and you have nothing else to watch.