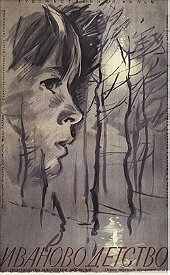 To be honest, I’m rather clueless about Andrei Tarkovsky’s work so I was really eager to check his directorial debut. First of all, I was lucky enough to find a Blue-ray box-set with 5 of his movies for a fairly cheap price and, with this first movie, I was really amazed by the impressive quality of the restoration done. Seriously, the damned thing really looked amazing, especially the opening scene. Concerning the movie itself, even though it is usually considered as Tarkovsky’s most accessible movie above all because it was the shortest one he made, to be honest, I still struggled to connect with this movie. Still, it was interesting that the directing was so different from what he did for ‘Stalker’ (the only movie I saw before from this director). Indeed, there were some scenes in this movie which were actually quite lyrical, even surreal sometimes. Still, what was the damned thing all about? Was the main goal to show WWII from the Soviets point of view? In this case, it wasn’t really convincing since Ivan had contact with only a handful of soldiers but it was probably not what Tarkovsky was aiming for. This movie was probably more about the depiction of the impact warfare might have on such a young child like Ivan. Indeed, it was rather striking how, at same time, it gave him a sense of purpose in this completely chaotic world but also constantly traumatized him even more. In a similar fashion, even though the ‘grown-up’ soldiers found Ivan’s involvement regrettable, you can sense that they actually liked to have him around as a simple distraction or because it was probably more satisfying or even soothing to take care of a young child instead of killing a bunch of random unknow guys and not getting yourself killed in the process. Anyway, to conclude, even if I might be too stupid to really get this filmmaker, the damned thing was still intriguing and it is definitely worth a look, especially if you like the genre.