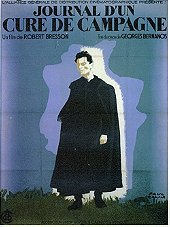 Since I heard some pretty good things about this flick and since it was available on Netflix, I was quite eager to check it out. It was also the first movie I saw directed by Robert Bresson and, as I expected, his work turned out to be quite challenging. Indeed, I’m not surprised that Andrei Tarkovsky was a huge fan of Bresson’s work and, to be honest, just like with Tarkovsky’s work, I did struggle to feel a connection with this movie. Indeed, even though the main character keeps telling us his feelings and thoughts mostly when writing in his diary, I was never really sure what I should think regarding the events displayed in this movie. I mean, you could argue that they tried to display the contradictions between what this community was expecting from their new priest and what he was expected to do according to his religious dogma. However, this theory completely clashed with the fact that the main character was heavily ill through most of the duration and, as result, the whole thing was rather murky, at least, to me. Still, Bresson had such a raw and realistic directing style, it made the whole thing rather ostentatious but also quite spellbinding to behold. It is also interesting to note that Bresson used to make takes after takes so that the actors would basically forget that they were acting but, to be honest, even if the performances were intriguing, I didn’t think that they were super realistic. Still, Claude Laydu, in his first acting part, was actually really good. Anyway, to conclude, even if it didn’t really blow me away, it was still a really interesting watch and it is definitely worth a look, especially if you like the genre.