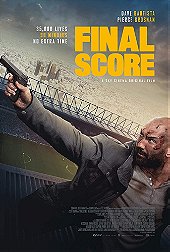 To be honest, I wasn’t expecting much from the damned thing but since there was a decent cast involved, I thought I might as well check it out. First of all, even though Pierce Brosnan (who was the main reason why I started to watch this movie) was displayed prominently on most of the promotional material, the guy actually showed up only for 10 mins. Concerning the movie itself, well, it turned out to be basically ’Die Hard in a Football Stadium’ but it wasn’t necessarily a bad thing. Eventually, what was more problematic was not the fact that the story was really generic but the fact that the directing was just so clunky and barely efficient. Indeed, right from the start, the intro telling some details about a revolution taking place in some obscure (and fictional) region in Russia was not only not convincing whatsoever but, above all, completely unnecessary. Seriously, can you imagine ’Die Hard’ starting up with a scene telling us in details Hans Gruber’s political agenda? Another even bigger issue was the fighting scenes which were obviously the main draw for this movie. Indeed, they were rather poorly shot with some annoying quick cuts mixed up with some shaky cam. At least, Alexandra Dinu was pretty badass and actually seriously convincing in spite of her rather small silhouette. And I have to admit that, with each movie, Dave Bautista keeps impressing me. Indeed, even if the material was actually rather weak, Bautista went actually beyond beating everyone’s ass, he was actually really acting and was actually quite convincing during the more quiet and dramatic scenes. Anyway, to conclude, in spite of Bautista’s decent efforts, the whole thing was rather weak and I don’t think it is really worth a look.