Funny, but with a message! 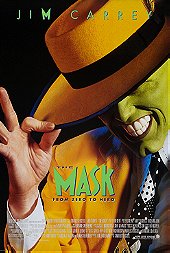 Nobody seems to bend the human form more than Jim Carrey, an undeniably great actor who could be the love child of Lawrence Olivier and a pot of play-do. The Mask capitalises on Carrey's talents, giving him free rein to do anything he conceivably can with his spaghetti straw of a body..with hilarious results. Scene after scene is delivered through a vehicle of slapstick that lightens your heart, watching Carrey do what Carrey does best. My friend's cannot spend an evening together without reeling off pretty much the entire screen play, one liner after one liner of quotable gold.

However, the other day, I taught an English class, as we discussed Robert Louis Stevenson's 'Dr Jekyll and Mr Hyde', I was all of a sudden awakened to the subtle moral messages and wittily parodic nature of 'The Mask'. Like so many before me I was too concerned with the bright lights and smoke that is JC to pay any real attention to the narrative.


The fundamental ideal in this movie discuss that age old, Freudian concern with the clash between id and ego, the turmoil humans face between primal instinct and social constraint. The Mask, is not only a modern interpretation of a canon classic, but a post modern deconstruction of the anguish of modern man. I know this sounds like tripe, but stay with me. Stanley Ipkiss is the archetypal put upon man(Dr Jekyll), fighting every instinct to unleash wroth upon a world that spurns him. The Mask (Mr Hyde) is the instinct and fury personified, a human embodiment of humanity's most primal urges, unconstrained by humanity, because he isn't human. Maybe I'm getting a bit above myself here, I am not saying The Mask is a cultural icon, we wont be putting it in a time capsule for future generations, but I am saying it is to be enjoyed on more than just the level of JC's stunning performance.

It's all very clever, this movie addresses an issue that has never left the consciousness of modern man, however we fail to feel any sense of foreboding, because Jim Carrey dressed as a french man is hysterically funny.