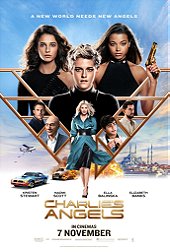 To be honest, I wasn’t really sure what to expect from this flick but since it was available on Netflix, I thought I might as well check it out. Well, I’m not surprised that it turned out to be a flop at the box-office. In fact, there is a fair chance that the two movies directed by McG, which were massively trashed when they were released, might be actually better than this borefest. It’s rather funny that some critics took the defence of this movie by claiming that it did work because they took this (rather outdated) concept with a supposedly feminist approach. However, this thin layer of feminism was certainly not enough to cover the fact that the whole thing was just so generic and, above all, so tedious. You might wonder what a solid action director could have done with this material as Elizabeth Banks, with her sophomore directing effort, obviously had no clue how to make the action scenes exciting or least a little bit more entertaining. Even more problematic was that the ‘funny’ scenes were not much better either. Concerning the trio of girls involved, I understand and appreciate that they tried to not present them as some sex objects, however, none of them was convincing whatsoever. Sure, Kristen Stewart was the only one who managed to give her character an interesting personality but she was physically not convincing and I never felt I was watching a highly trained spy. Naomi Scott was really lovely but she was stuck playing a completely ridiculous character who, somehow, tagged along because that’s obviously what these professionals always do, take a completely random girl and involve her in a dangerous spy special ops. Concerning Ella Balinska, she was supposed to be the tough one of the bunch but, again, she was never really convincing. Anyway, to conclude, the whole thing was not much better than a group of girls playing ‘pretend', it was seriously weak and I don’t think it is really worth a look.