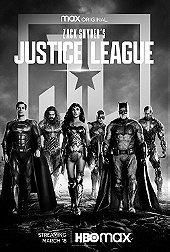 I can’t say I was really dying to see the infamous Snyder cut but I have to admit that I was curious about the end-result. To be honest, I didn’t remember much about the Whedon cut but, after reading the review I wrote at the time, I apparently didn’t hate the damned thing though. Basically, it was a rather misguided version of a movie which was never going to be amazing anyway. Well, in spite of what all the DC fanatics who were very vocal about getting this new version might argue, all in all, it was still not a really strong story though. It didn’t help that the storyline was just so similar to the one displayed in ‘Avengers: Infinity War/Endgame’. Indeed, on one hand, Thanos was gathering the Infinity stones and, on the other hand, Steppenwolf/Darkseid were gathering the Mother Boxes. On one hand, you had also Thanos who wanted to destroy a good chunk of the human population and, on the other hand, you had Steppenwolf/Darkseid who wanted pretty much the same thing. However, I have to admit that this movie was supposed to come out before the Marvel juggernaut though. The funny thing was that the Whedon cut was the shortest DCEU movie and this new version turned out to be the longest super-hero movie ever made so far, no less than that. Seriously, 4 freaking hours?!? On the other hand, there is no doubt that, this time around, the characters were much more fleshed out, especially Victor Stone/Cyborg. Furthermore, the tone was darker and much more consistent with the previous movies in this franchise and, this way, it also gave the whole thing a much more epic feeling, something that was probably missing with the theatrical version. Anyway, to conclude, even if I don’t think I really needed this new version, it was still a decent watch and it is worth a look, especially if you like the genre.