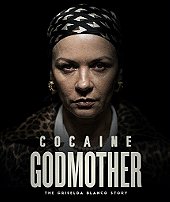 I wasn’t really sure what to expect from this flick but since I have a weak spot for Catherine Zeta-Jones, I thought I might as well check it out. Well, to be honest, I was actually surprised by how disappointing the damned thing actually turned out to be. It’s too bad because it really had some potential and it could have been some really neat female version of ‘Scarface’. Unfortunately, pretty much nothing worked in this movie, I’m afraid. Of course, you might wonder if casting a Welsh actress to play the most notorious female Colombian drug trafficker was a good idea but I think that Zeta-Jones was not so bad at all. In my opinion, she was the least problematic aspect of this movie. Above all, the whole thing was so poorly written. For example, the first scene (which was probably fictional) was actually pretty good but, then, they made this massive jump and Blanco was suddenly living in New York, married with 3 kids but what happened to her in the mean time? Instead, you get some lame voice-over from a random DEA agent, pretty much the most over-used gimmick in such drug related drama’s. Seriously, it felt as if the guy was reading the bullet points from her Wikipedia page. So, she was married 3 times, she had 4 boys, they sure managed to pass through all this information but all these characters and the relationship they had with Blanco were just barely developed whatsoever. Seriously, the whole thing was just so clunky but since it was a production from the Lifetime channel, I should have expected it though. Anyway, to conclude, in spite of some really strong material, it turned out to be just terribly disappointing and you should probably avoid the damned thing.