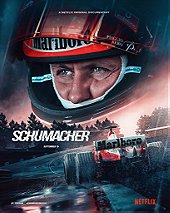 To be honest, I have never been a fan of Formula 1 but since Michael Schumacher was such a legend, I was quite eager to check this new documentary on Netflix. Indeed, when I was growing up in the 90’s, Schumacher was the rising star in this sport facing such legends like Alain Prost and Ayrton Senna and he would then rule this sport for more than a decade. Well, it turned out that his career was actually quite fascinating, especially the first 9 years, until he started to win all these championships with Ferrari. Basically, he did pretty much the same thing Michael Jordan did with the Chicago Bulls, he turned a really moribund team into one of the greatest dynasties in the history of Formula 1. Of course, you could argue that they were not really critical but it is something rather expected with this genre and it didn’t really bother me. What was more bewildering was how they handled his tragic ski accident which occurred already 8 years ago. Indeed, back in 94, he did win his first championship but it was also the year during which Senna ended up in a coma and died after crashing during the San Marino Grand Prix. Eventually, almost 20 years later, after surviving countless Formula 1 races driving faster than 200 kph, Schumacher also ended up in a coma but not on the racetrack but while doing some seemingly safe skiing. However, even though the whole thing was constructed in a way that could make you believe that Schumacher did die just like his role-model Senna, he actually didn’t.  In fact, while they were shooting this documentary, interviewing his wife among other things, the guy was actually back home but you never get to see him (which was understandable) and you never get a clear idea about his current condition (which was strange). Anyway, to conclude, in spite of its flaws, it was still an interesting documentary about a fascinating sports legend and it is definitely worth a look.