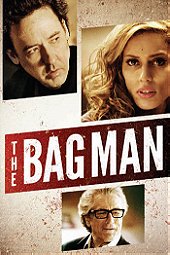 To be honest, I wasn’t expecting much from the damned thing but since it was starring Robert De Niro, I thought I might as well check it out anyway. Well, even if it was maybe not the worst movie I have seen starring the legendary actor, it was still not far from it though. Basically, it was your typical cheap direct-to-DVD thriller, John Cusack’s speciality for about a decade, but you might wonder why De Niro would bother with this kind of movies at this stage in his career. Anyway, even if it wasn’t really a long movie, it still felt like it was lasting forever which is never a good sign. Concerning the cast, Robert De Niro was actually not bad but he basically showed up for only a few scenes. At least, De Niro seemed to have some fun but, on the other hand, Cusack seemed to be completely bored out of his mind and displayed the same conviction and commitment that you might expect from someone working at your local McDonald’s. Concerning Rebecca Da Costa, I have to admit that she was quite attractive and I can imagine that she hoped to get her big breakthrough by working with such big names. However, her character was constantly described and handled as a hooker and, while she did her best to convince the viewers that there was actually much more going on with this character, I was never convinced, or worse, I never really cared. Eventually, it’s basically the kind of movies which didn’t display a single original idea. Seriously, somehow, they even managed to squeeze in an ending directly lifted from ‘Seven’. Anyway, to conclude, the damned thing was really generic and terribly weak and there is no reason whatsoever why you should waste your time with it.