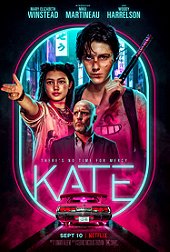 I wasn’t really sure what to expect from this flick but since I have a weak spot for Mary Elizabeth Winstead and since it was available on Netflix, I thought I might as well check it out. Well, this movie definitely had some potential. Indeed, the action scenes were very well done and quite entertaining, I really loved the Japanese setting and, above all, Mary Elizabeth Winstead was really convincing and completely badass. And, yet, I still struggled to care about the damned thing after all. The issue was that the story was just so generic and predictable. Basically, Winstead ended up playing some kind of female version of John Wick which probably sounds cooler than it actually was. To start with, sure, ’John Wick’ was decent action flick but I also think that it is also rather overrated. Basically, I don’t think that watching a seemingly invincible assassin killing in the most badass way possible an endless army of thugs is really so much fun. In this case, they added the fact that the main character was also slowly dying which seemed intriguing at first but this idea did backfire after all. Indeed, the movie then constantly switched between scenes during which the main character was barely able to walk and scenes during which she would kick some major asses as if nothing was wrong with her anymore. I won’t blame Winstead, in both modes, she was actually always quite compelling but you basically can’t have a character dying and giving some martial-arts masterclass at the same time, that’s just some very sloppy writing. Concerning her side-kick, once again, the character had some potential but they really pushed her sassy side and I think it is rather doubtful that a Japanese teenager would have such a flawless control of the English language. Anyway, to conclude, in spite of its flaws, it was still a decent watch but I’m pretty sure I will completely forget about it within a couple of days.