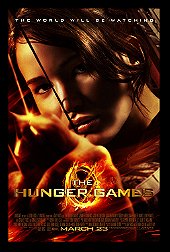 If you think that the dehumanizing, brutally atrocious behavior that is showcased in The Hunger Games seems too far-fetched or like something that would never happen in real life or like something that "only happens in the movies," all I can say is that I envy your blissful optimism. I'm much more cynical of the spirit of the human race, and I don't consider the future depicted in this movie to be all that unlikely. Over the last few years, the mainstream public has become obsessed with watching and relishing reality shows in which human beings expose the ugliest, most foul aspects of their personalities. Audiences take a frightening amount of delight in watching this sort of thing, and The Hunger Games is an indictment of this horrifying fascination. This is a conventional movie - you won't be surprised by any of the motions it goes through, and there are a few occasions in which it takes the easy way out to avoid becoming too dark. But it's elevated in quality by its spot-on social commentary and by a searingly courageous lead performance.

The film takes place at some unspecified point in the distant future (probably not as far away as you'd think), and we're presented with a society in which an elite few are the powerful people who get to bask in all the riches, luxuries and technological advances, whereas the rest of the population has been divided into 12 districts - District 12, in particular, is a grim place that looks like a poor farm town right out of the 1930s. Two kids/teenagers (one male, one female) are selected from each of the 12 districts to take part in the titular games, which are televised for everyone's enjoyment and feature the 24 kids and teenagers being left stranded in the woods and told that they must fight each other to the death until only one of them remains and is thus named the winner of the Hunger Games. This year, the representatives from District 12 are Katniss (Jennifer Lawrence) and Peeta (Josh Hutcherson). They're whisked away, but before being thrown directly into the games, they go through a mentoring process. I expected that this meant that the kids would perhaps get some sort of physical training in battle and survival skills, but of course, the makers of the show are more interested in primping these kids up to make them appealing to the public. In fact, that's of vital importance, they're told, because if they happen to be well-liked by the public, they may receive help from "sponsors" which will prove essential to their survival in the game.

All the goading that takes place to encourage Katniss and Peeta to make a good impression before the viewing public in their preliminary interviews feels not unlike what probably happens backstage in your typical American Idol-style reality show in which the contestants give performances and move forward depending on how popular they are with audiences. But once the actual games begin, the situation is more like an extreme version of the dehumanizing challenges that people are subjected to in shows like Survivor, in which people form alliances to get rid of one another and stab each other in the back frequently... except, as I'm sure you'll imagine, the word "stab" can be taken literally in this case. However, The Hunger Games actually exhibits a decent amount of restraint in terms of the amount of graphic violence it depicts. I give the movie credit for doing this, and I'll explain why. First, I disagree with the belief that the film, like so many others of its ilk, toned down the violence exclusively to achieve a PG-13 rating. I believe that The Hunger Games hesitates to show too much graphic violence because it objects to it. The film is a cautionary tale about how people's obsession with comfortably watching other human beings tear each other apart is causing us to devolve as a society, so the last thing the film would want is to become yet another window through which the mainstream public can relish that material by viewing it in all its glory. If you actually found yourself wanting to see more of the violence in this movie, then you're guilty of the same sin at which the film aims its critical arrows, and perhaps you should re-examine your moral compass. Secondly, the truth is that, in order to work effectively as a piece of cinema and to deliver the message it wants to get across, The Hunger Games had no need whatsoever to be more graphic in depicting the harrowing acts that take place here between kids and teenagers. If a 15-year-old boy maims a 10-year-old girl, I don't need to see every detail of that in order to know that it's horrible. I know it's horrible. And I hope you know it, too.

One thing that instantly caught my attention as the "games" got under way was the great potential that this film had to enter dark moral waters. I expected to see scenes in which Katniss, our heroine, would be forced to make incredibly difficult decisions for the sake of her personal survival. On more than one occasion (and with regard to more than one of the supporting characters), I said to myself, "Wow, if there can only be one survivor, then she's gonna have to turn on this person eventually, and considering what we're seeing here, it's gonna be really tough and intense for her to do that once she's faced with the need to do it." Unfortunately, the plot turns are tweaked here on several occasions so that Katniss is never forced to make any difficult moral decisions that would make people lose their sympathy for her. The film is very interested in maintaining its lead character as a totally uncorrupted soul. This has the positive effect of making us consistently root for Katniss, but it also has the negative consequence of making the film lose a fraction of moral complexity which could've made this a truly great motion picture. The film has no qualms showing all the physical and emotional adversity that Katniss experiences on an individual level, but it shies away from forcing her to engage in the kind of heart-wrenching betrayals that could've made this a deeply disturbing and devastating work of cinema.

Jennifer Lawrence's performance oozes a dizzying blend of ferocity and vulnerability. This is the first memorable performance of 2012, and despite the fact that The Hunger Games has its share of very well-known stars, there's never a doubt that this is Lawrence's movie. The 2 hours and 20 minutes that it takes to watch this film hinge entirely on our ability to root for Katniss and to believe in her resolute spirit and in everything that's at stake for her, and Lawrence doesn't lose her grip on the audience for a second. I wasn't as marveled as most people were by Lawrence's Oscar-nominated turn in Winter's Bone, and she had relatively forgettable roles last year in The Beaver and Like Crazy, but with The Hunger Games, I have no doubt about the greatness of her talent. She gets able support from the secondary cast, and it was a particular delight to see Stanley Tucci's grandiose work as the film's resident Ryan Seacrest and Elizabeth Bank's creepily cheerful work as one of the games' organizers.

The plot structure of The Hunger Games may be short on invention, but the film couldn't be more timely in terms of the direction in which its aims its criticism. The film is well aware of the fact that the public craves a cathartic ending in which one person survives, as a way to justify the fact that they just watched a bunch of pointless human-on-human mayhem just for the hell of it, and the film gladly pounces on that during the final act. Not having read the source material, I admit to being highly curious in terms of the path that the story will take next. All I can say for the time being is that, if the subsequent entries manage to be as thoroughly gripping and relevant as this film, and if Lawrence continues bringing her A game, the odds are ever in the franchise's favor. While I recognize the movie's minor shortcomings, it has been a hell of a long time since I've felt glued to my seat in a movie theater for over 2 hours.