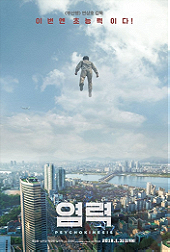 I wasn’t really sure what to expect from this flick since it was suggested by a fellow Listal member and since it was available on Netflix, I thought I might as well check it out. Well, eventually, it turned out to be some kind of mix of ‘Akira’ with Bong Joon Ho’s work and I have to admit that this mix did sound really appealing. Unfortunately, even if the damned definitely had some potential, there were just too much stuff that didn’t really work for me. First of all, even though the dynamic between the main character and his daughter was not bad, these characters were barely developed at all. The other characters were even worse though except for the evil Hong Sang-moo who was quite fun to behold. However, a bigger issue was a whole sub-plot involving the daughter having some major conflict with a huge construction company. Not only this real estate battle was seriously generic and rather tedious, in my opinion, the way it was handled was rather weird. Indeed, in this genre, you usually have some real estate tycoon offering the owners some amount of money and then forcing them to take this deal even if they didn’t want it. However, in this case, there was never any mention about money, instead, right from the start, you had some very violent thugs trying to brutally get rid off of these small shop owners. Seriously, is it really how such conflicts are handled in South Korea? I mean, even in the most backward Western, there is some amount of civilized negotiation. In my opinion, the way they handled such a generic plot was unnecessarily confusing. Anyway, to conclude, in spite of its flaws, I have to admit that it was still an original super-hero flick which had tons of potential and it is worth a look, especially if you like the genre.