The Raven is the peak of what is often regarded as The Stranglers best period of music, beginning in 1977 with their groundbreaking album Rattus Norvegicus. In these three productive years, four studio albums were released. Rattus Norvegicus and No More Heroes, both released in 1977, Black and White in 1978 and The Raven in 1979. The pick of the bunch, The Raven is a multi-layered album, full of diverse and unique tracks. What’s sad about The Stranglers is that, despite their commercial success at the height of the Punk movement and the fact that they lasted longer than any of the other leading groups, nowadays, they are almost forgotten in the shadow of The Clash and The Sex Pistols. The latter two are, obviously, of vital significance. Both were responsible for some legendary music, as well as encompassing the attitude of the times. However, The Stranglers were also vessels for a changing outlook, with iconic single No More Heroes perfectly conveying that. So why are they so overlooked today? Not only were they able to contribute to the raw, violent sound of Punk rock, they managed to weave in their own style, employing a prominent but not overbearing use of the Keyboard. This album is the perfect example to accentuate the tragedy of their under-rated status.

By 1979, they were beginning to build upon their already established talent of rhythm and theme transcending lyrics. Punk sentiment mixed with a versatile level of surrealism, seen in the roots of their career and fully explored here. The Raven is their magnum opus, a commercial and critical success, lately glazed over by rock fans and critics alike.

They kick off the album with short instrumental Longships, one of two songs that explores the Nordic concept, which they abandon after the eponymous second song. The two songs are well mixed, combining thick basslines with a softer keyboard texture, subtle drumming and well placed guitar twangs. Two songs that highlight the best feature of The Stranglers, an ability to intertwine their instruments on an equal level, giving precedence to no particular band member. Whilst most Punk music at the time was driven by ragged guitar and a sporadic use of drums and bass, The Stranglers took a more Progressive Rock approach. Musically, they are on the same level as Pink Floyd, themselves masters of texturing. Although unlike them, The Stranglers weren’t hated by the Punk community because deep down, they weren’t afraid to play up their Punk credentials. In attitude at least, they were still on the same wavelength.

The third track of the record, amongst the best of the album, is the one song in which a particular instrument is given priority. The driving basslines of the brilliantly titled Dead Loss Angeles, a name mixing the idiom ‘dead loss’ with the famous Californian city, were achieved by having both bassist JJ Burnel and guitarist Hugh Cornwell playing the instrument. Meanwhile, the name of the song is a perfect summary of the satirical lyrics, which include such attacks as ‘android Americans, live in the ruins there’. Hugh Cornwell sings lead vocals, suiting the pace of the song. The heavy track is followed by the equally brilliant and more intricate Ice, a masterpiece of composition, with an incredible opening and closing instrumentation to boot. Meanwhile. It’s one of the best tracks that showcases the incredible talent of drummer Jet Black and keyboardist Dave Greenfield. 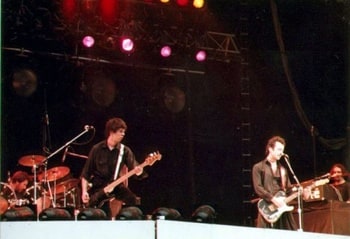 However, it is the 8th track, the sombre Don’t Bring Harry, that truly shines. A melodic anti-drugs song straight from the heart of the members, particularly lead vocalist on the song, JJ Burnel. His baritone voice works wonders with the poignant lyrics, which due to their broadness, isn’t restricted to only those who share in their drug use experiences. It can be attributed to both depression and paranoia, depending on how you look at the lyrics. Either way, with lines such as ‘once there was laughter, now there’s compromise’, it is an incredibly deep song. Released as a single, it was unsuccessful, perhaps due to its dark overtones. Comparatively, leading single Duchess proved to be more of a hit, reaching number 14 in the charts. Yet this outcome is understandable, based on its commercial accessibility as a song and the controversy sparked by the music video. As the adage goes, ‘all publicity is good publicity’.

Other highlights from the album include the vividly surreal Meninblack, featuring distinctive guitar parts by Cornwell and one of the best uses of experimental vocal modification, album closure Genetix, sung by keyboardist Greenfield and the humorous pasquinade Nuclear Device.

This is the best album that no one pays attention to. With all the fame garnered by Peaches and Golden Brown, few people ever endeavour to explore the rest of their discography. If they did, they would learn that these two singles (from 1977 and 1981 respectively), simply signal the tip of the iceberg. For an album that reached number four in the charts and one that is surrounded by the belief that it was cheated off the number one spot by a chart error, it is amazing how it has since come to be covered with dust, left aside in favour of other seventies albums from the era. Such a lack of appreciation can be seen in books like 1001 Albums You Must Hear Before You Die (2011, Quintessence Editions), in which just one album makes the grade (Rattus Norvegicus) and 1001 Songs You Must Hear Before You Die (2010, Quintessence), in which Peaches remains the only represented song, further demonstrating the effects of the Iceberg issue. For casual listeners there is an excuse but for professional music critics? As good as these books are, giving Coldplay more attention (two albums, two songs), isn’t a fair assessment of musical talent. Furthermore, Rolling Stone Magazine, who I by no means endorse, leave Hugh Cornwell off their list of 100 Greatest Guitarists. Not unlike Pete Townshend, he isn't known for his solos, rather his overall contribution to the texture of the music. Yet unlike Pete Townshend, he is left off the list completely.

Digressions aside, The Raven is an example of admirable craftsmanship, a high point in a shamefully ignored career, by one of the most important, unique and daring of all artists from the late seventies. The album is well produced, an example of exceptional subtlety, with each member bringing a significant amount of talent to the recordings. It’s this album that also saw the seeds sown for their next release, the concept album The Gospel According to the Meninblack, their 1981 foray into the themes of outer space.