Review of The Stand 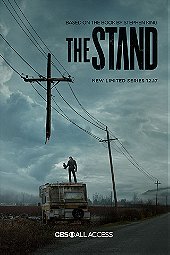 The first half of this TV show is a disaster with its incessant and irritating time back and forth, the characters are very poorly introduced and I don't like the cast (except the excellent Owen Teague as Harold Lauder).
Things are a little better in the second half, more linear and fairly consistent with the novel, despite embarrassing script shortcuts.
And it really becomes anything with a completely absurd last episode which tries to invent a useless epilogue (and outside the novel) to perhaps announce a sequel ... that I will not watch!
Clearly, don't waste your time and read or reread Stephen King's masterpiece. And if you're not allergic to the 90s, check out the much better TV version from 1994!