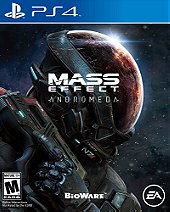 The original Mass Effect Trilogy has a very special place in my heart. Needless to say it's one of my all time favorite video game franchises with its vast universe, fertile or harsh worlds with interesting alien species and stories to tell, intense missions, impeccable storytelling and lovable as well as memorable characters and that solid dynamic between them.
Andromeda was a nice add to the ME universe and follow up. Although the game had big shoes to fill and didn't quite match up to the high expectations of the fans, but still managed to earn its place among Normandy crew and their timeless Commander Shepard.
The game worked, looked and felt great! Gameplay was smoother than ever in any ME game and the graphics were gorgeously detailed! Many times I stopped to admire the scenary, planets from space or the space itself and take bunch of screenshots. Or striking against an near by crossing enemy squat, 'cause the firefights worked so smoothly and were hooking with a use of short thrusting jetpack doing some tactical maneuvers.
There still were few technical defects, but they've been fixed since the launch. As always, there will be some level of technical problems on launch in every game. So if you want to save yourself from frustration, buy the game at least six months after the release so the patches are available.
Characters didn't reach even near the quality that the original trilogy held, but they were very likable and interesting individuals with distinctive qualities of their own. Few of them sticking out for me. One being Peebee, whose race Asari has always been my favorite race from the franchise with their attractive appearance, high intelligence and biotic powers. Bioware truly managed once again create and maintain an excellent dynamic and humor between the characters, which and who usually builds the emotional connection to the game for me and are the driving forces that keeps my interest high and dedication to the end. Fulfilling the experience you need a great cast to work around the story and more importantly, protagonist.
I liked how green Ryder was and not so strict. Unlike Shepard, who was an experienced marine from the start and have had her/his afflictions on the battlefield already, Ryder's first baptism of fire was excellent beginning for her/his journey and becoming experienced soldier as well as Pathfinder mission after mission. As it was an introduction to the gameplay, graphics and game's AI for the player. You got to learn and experience the ropes with her/him together along the way. Which started with a rude awakening.
After 600 years of travelling through dark space in cryosleep searching for a new home with known races, arriving in Andromeda galaxy our hero crashes in the reality of the mission and possible new home pretty hard. Searching and settling new home didn't turned out to be an easy job. Not even after the first contact and loss helping the cause. But once you touchdowned the first promising livable planet and build your first outpost, creating them more in other planets and dealing every objectives making them as better places to live as possible, the outcomes became pretty rewarding fast.
Not forgetting a bunch of sidequests of course. Which majority of them once again felt useless fillers, but they also were, like always, perfect activities to get to know the planet's people, culture, dangerous wildlife and beautiful sights. And at the same time raising levels, collecting credits as well as resources and gear making you stronger opponent in the process.
The new threat, Kett, was interesting design and enemy to follow Saren, Geths, Collectors and Reapers. Their determined goal reaching made them ruthless and interal feuds dangerous enemy to fight for. Their devastating war with local alien race Angaran helped to forge an alliance and uncover their world and backstory, as gaining their support in the war against common enemy after you've been proven your worthy to them fully.
The journey through familiar hard decisions. Vast harsh lands. Fighting against dangerous enemies. Meeting new friendly and not so friendly faces. Experiencing joyful and sad moments. Loss, love, friendship and buckets of empty thermal clips the journey ended satifyingly.
Inside the game, world, story and characters beats familiar Mass Effect heart. Its predecessor's legend drives the successors on and shows that they can be worthy of them. In their own way.