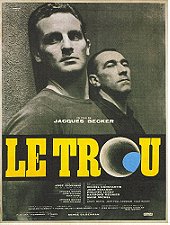 Since this movie had a really solid reputation, I was quite eager to check it out. Well, I wasn’t disappointed, that’s for sure. Indeed, I always had a weak spot for movies dealing with prison escapes and this one was easily one of the best I have seen in this genre. Indeed, eventually, the whole thing was just so raw and gritty and, yet, without any catchy soundtrack, without fancy special effects or bombastic action scenes, it was actually seriously quite spellbinding to behold. You also get the feeling that you enter a strange underworld with 5 guys stuck into a small room for hours, almost sleeping on top of each other. Except for Claude Gaspard with his good looks, we’ll never know how they did end up there but you might wonder if they really deserved to live in such dehumanizing conditions. As a result, you might argue that the characters were not really developed but I think it goes along with how dreadful this place was. Indeed, slowly, they all lose some trademarks specific to their personalities, becoming one grey uniform human mass in the process. Finally, the neat thing with such a vintage prison break is that, back then, they didn’t have such advanced security systems like they have nowadays and, as a result, it was actually believable that these guys would try and actually manage to pull this out. Even the ending actually made sense. Of course, you could blame Gaspard but both options had some massive downside. I mean, would it really make sense to escape with his buddies when he was supposed to be released soon? No really but it doesn’t change the fact that what he did was really a rat move. Anyway, to conclude, the damned thing was just seriously entertaining and it is definitely worth a look, especially if you like the genre.