How to Make Love Like an Englishman review
11 Views
0 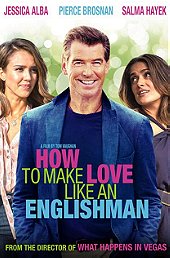 To be honest, I wasn’t really sure what to expect from this flick but since there was a decent cast involved, I thought I might as well check it out. Well, even though the title was promising (at least, the one they used in Canada), unfortunately, it turned out to be a seriously underwhelming romantic comedy. Seriously, it was the kind of romantic comedy during which pretty much nothing worked, I’m afraid. I mean, basically, the whole point was to have Richard ending up with Olivia but the way to get there was just so convoluted, so unconvincing but, above all, not entertaining whatsoever. The basic idea was that Richard was supposed to be a major womanizer and, yet, within the first 5 mins, he was already in a long-term relationship with Kate. On top of that, there was this weird awkward scene during which he was hitting hard on Kate’s sister and, yet, none of the characters ever mentioned that fact afterwards. Anyway, even though Salma Hayek and Jessica Alba were both quite gorgeous as usual, their characters were eventually barely developed whatsoever and, if you would believe this movie, the only reason that Brosnan’s character was ever interested in them was because of their looks. Eventually, his relationship with his father was actually much more interesting thanks to a really solid Malcolm McDowell who basically stole the show every time he was on the screen which shows how poorly this movie was put together. Anyway, to conclude, even though the damned thing was rather harmless, it was still seriously weak and I don’t think it is worth a look, even if you really like the genre.