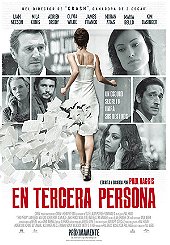 To be honest, I wasn’t really sure what to expect from this flick but since it was directed by Paul Haggis and since there was a really nice cast, I was quite eager to check it out. Well, almost 10 years after winning (or stealing) the Best Picture Academy Award with ‘Crash’, Haggis came up again with another ambitious hyperlink feature, this time, with a slight surreal edge. So, on paper, it must have sounded like a sure winner, especially with a such a stellar cast involved. Unfortunately, it turned out to be a massive pretentious mess after all. Basically, its greatest strength was the cloud of mystery around all the characters involved and, as a result,  you keep guessing until the end, wondering who the hell are these people and how could they be connected with each other. Unfortunately, very soon, it turned out fairly quickly that, in spite of the effort of all the actors involved, none of these characters were actually interesting and it was the same about their own respective subplots. Eventually, the explanation at the end, that most of it was actually invented by this writer played by Liam Neeson, was not only completely predictable but also the laziest way to tie up an hyperlink feature like this one. At least, it was nice to see Liam Neeson playing something else than a badass guy in some generic action flick and you won’t hear me complaining about watching Olivia Wilde running around naked. Anyway, to conclude, my rating is probably too generous here, it has been a while since I have seen such an ambitious project turning out to be so empty and pretentious but I guess it might still be worth a look though, if only for the actors involved.