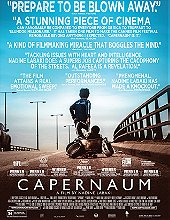 I wasn’t really sure what to expect from this flick but since I kept hearing some really good things about it, I was really eager to check it out. Well, to be honest, even though I really liked it, it turned out to be a hard, even relentless watch and I have to admit that I did struggle to get a good grip on the damned thing. Basically, nothing was clearly stated in this movie such as who were the characters, what was their background, how did they end up in such positions,... In fact, it was only half through the damned thing that I finally figured out that it was taking place in Lebanon. Of course, the mixed up chronology didn’t help either. On the other hand, it was probably all by design as the movie title was, after all, synonym with ‘chaos’. And, yet, there’s no denying that this movie had some haunting qualities and I keep thinking about it since I saw it. I think the scenes with the two kids alone had the most impact on me and their performances were just amazing (I’m still not sure how they managed to go this far with such a young baby though). Even though it was something that wasn’t directly touched by this movie, it still provided a good explanation why 1000’s of people every day are risking their lives to illegally immigrate to Europe when actually nobody wants them there. Even if you more or less aware of it, this movie still provided such a ghastly look on the despair experienced by this people in Lebanon. Eventually, the huge contrast with our luxurious comfortable lifestyle seems so surreal, it feels as if we are now living in two completely different and separate worlds. Anyway, to conclude, even if it didn’t completely work for me, it still managed to touch me though and, only therefore, it is definitely worth a look.