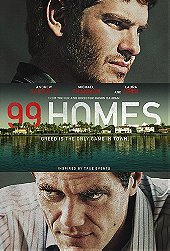 To be honest, I wasn’t really sure what to expect from this flick but since I have a weak spot for Andrew Garfield, I thought I might as well check it out. Well, even though the beginning was extremely strong and promising, unfortunately, the whole thing slowly fell apart though. I mean, it was an interesting turn of event that Dennis Nash would work for Rick Carver. Of course, you could blame the guy but since no one else would hire him, what else could he do to feed his family? However, I don’t think it really made sense that Rick would hire him though. Sure, it made for a nice plot twist but a guy like him could hire pretty much anyone else instead of someone he just evicted. However, it became even more far-fetched when he decided to make Dennis evict other people. I mean, would you ask a plumber or a carpenter to do this kind of job? Eventually, I think it was the biggest issue with this movie, the fact that, in spite of another really solid performance by Michael Shannon, Rick Carver’s motives regarding his relationship with Dennis Nash remained really obscure through the whole duration. Concerning Dennis, I wish they didn’t turn him into such a wimp who got sucked into Carver’s messed up schemes. I mean, there is nothing wrong about getting a f*cked-up job especially if there is really nothing else available but I think it would have been more interesting if they would have chosen to have him keep both feet on the ground instead of getting filthy rich and buying a ridiculous mansion in the process. Anyway, to conclude, in spite of its flaws, the material was still terribly topical and interesting and it is definitely worth a look.