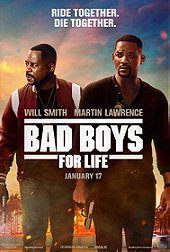 It is rather doubtful that we needed a new ‘Bad Boys’ instalment (isn’t it the case with most sequels though?) but since this movie had been fairly well received and since it was available on Netflix, I thought I might as well check it out. Well, even though it was probably nothing really amazing, at least, it was miles better than the rather abysmal ‘Bad Boys II’. Indeed, Will Smith and Martin Lawrence had once again a pretty good chemistry and they were quite funny to watch together. However, even if the story was decent enough, the running time was 2 hours and it was just way too long though. Seriously, there is no good reason whatsoever that an action flick with such a generic plot should last for so long. Still, there were a couple of nice ideas though. Indeed, I liked the fact that Mike Lowrey’s reckless behaviour might be finally catching up with him after 25 years, resulting in him getting shot, and it would have been interesting if they further developed this. In the same way, it was pretty neat that Lowrey actually fell in love with a major drug dealer when he was young but, unfortunately, this franchise will always stick to its mantra ‘Bay Boys Forever’ (which could be the title of their next instalment) so everything deviating from this was unfortunately swiftly discarded though. It was also not necessarily a bad idea to give them some new partners but, next to the charismatic team of Smith and Lawrence, they didn’t stand a chance, I’m afraid, and they were all baredy developed at all. Anyway, to conclude, even it might seem that I wasn’t really enthusiastic, it was actually a decent action flick and I think it is actually worth a look, at least, if you really like the genre.