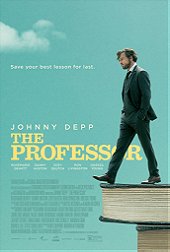 To be honest, I wasn’t expecting much from this flick but since I always had a weak spot for Johnny Depp, I still wanted to check it out. Well, it wasn’t really good, in fact, it was even pretty weak. Indeed, the damned thing turned out to be just terribly generic, uninspired, lazy and pretentious. I mean, it seems that the makers took the basic core of ‘American Beauty’ and simply switched the middle life crisis with some terminal cancer hoping that the audience wouldn’t notice it. Concerning the main character, it wasn’t much better, I’m afraid. Seriously, I never really cared about the guy. However, the supporting characters were even less interesting but, at least, they had the excuse that they were not developed whatsoever. And, yet, even though most of this movie was pretty much a disaster, somehow, Depp was once again terribly charismatic. Indeed, in spite of the rather poor material, the guy still managed to deliver an actually solid performance and, basically, he was just really fun to watch. While watching this other misfire from the stellar actor, I couldn’t help thinking about the trajectory of his career. I mean, the guy had been the king of the teenager heartthrobs in the 80’s, the king of the indies in the 90’s and then the king of the blockbusters in the 00’s. However, he seems nowadays to be pretty much lost and you might wonder if he might make a come-back at some point but it seems highly doubtful. The bottom line is, basically, does Johnny Depp really care anymore or does just he go from one pay check to the other just to finance his outlandish lifestyle? Anyway, to conclude, I was probably too generous with my rating here and I guess the damned thing might be actually worth a look but only if you are a die-hard fan of Johnny Depp.