The Face of Love review
7 Views
0 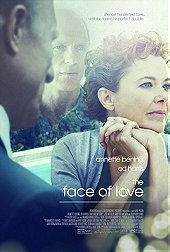 I actually had no idea what this movie was about but since there was a decent cast involved, I thought I might as well check it out. Well, even though Annette Bening and Ed Harris had some nice chemistry together, to be honest, I really struggled to care about the damned thing. The main issue was that, even though I understood what the makers were trying to do, I just didn’t care much for their approach. Basically, according to them, the relationship between Nikkie and Tom was pretty much sick and doomed to fail but I strongly disagreed. Indeed, for many, or even for most, romantic relationships, people get together for the most misguided reasons such as money, social status, ethnic background, pressure from your parents,… Hell, even Woody Allen eventually got married with the adopted daughter of his girlfriend. To get with someone because they physically look similar to an ex-boyfriend or ex-girlfriend is hardly uncommon and, even though it might be indeed misguided, I don’t believe it should be such a deal breaker. Especially in this case, Nikkie was indeed at first interested in Tom because he looked like Garret but if the guy would have been a jerk, she would have walked away. However, she stuck around not because Tom looked like Garret but simply because he was actually a nice guy showing that this relationship could have worked on the long run. Of course, it still would have been weird and misguided but many romantic relationships are just as weird and misguided only for some other reasons. It’s too bad because Benning and Harris were both pretty good and it would have been interesting if they had tried to give this relationship a chance to succeed. Anyway, to conclude, in spite of its flaws, it was still a decent watch and I think it is worth a look, especially if you like the genre.