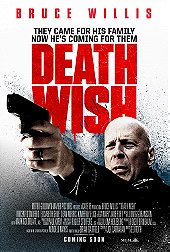 To be honest, I wasn’t expecting much from this flick but since it was directed by Eli Roth and starring Bruce Willis, I still wanted to check it out. First of all, apparently, Leonardo DiCaprio is dating right now Camila Morrone but, even though she is indeed quite gorgeous, she still looks a child though and it would be as if I was dating one of my daughter’s friend (for the record, DiCaprio is actually older than me). Anyway, coming back to our main feature, at least, it was more ambitious than all the garbage Willis has been making recently but, unfortunately, it was only slightly better though. Indeed, the original ‘Death Wish’ (a movie I still haven’t watched at this point) has always been the grandfather of the vigilante genre but, to be honest, I never really cared for this genre. To make things worse, in this case, they just didn’t add anything new or interesting. First of all, you might wonder if Bruce Willis was really the best choice for this character. I mean, the whole point was to see a mild-mannered man becoming really badass killing a whole bunch of bad guys in the process but the problem was that Willis has spent most of his career playing such badass characters and it clearly undermined this process. Furthermore, there was barely any psychology or moral compass involved. Indeed, it could have been interesting to see the main character actually losing his grip with reality but I guess it would be asking too much from Bruce Willis who never really acts anymore but just passes by to cash his check. Finally, this kind of movies always becomes some kind of commercial for the NRA showing to us how guns are actually really cool, how killing thugs is awesome, and trying to convince us that, if we would all have guns, we would live in a better world which is something I obviously don’t believe whatsoever. Anyway, to conclude, even if I have seen worse from Bruce Willis, the damned thing was still pretty weak and I don’t think it is really worth a look, except maybe if you really like the genre.