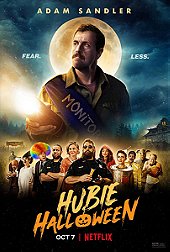 To be honest, I wasnвАЩt expecting much from this flick but since it was available on Netflix, I thought I might as well check it out. Well, I guess it was bound to happen that Adam Sandler would deliver some Halloween comedy at some point but I have to admit that it was not so bad after all. Indeed, at least, it was a slight improvement on the abysmal вАШMurder MysteryвАЩ. However, as usual with Sandler, the damned thing was still pretty weak though. It is difficult to pinpoint what was the biggest issue between the annoying moronic main character (such a cringe-inducing trademark from Sandler) or the completely misguided approach. Indeed, even though the movie was supposed to be about the fact that bullying someone mentally impaired, or anyone for that matter, is wrong, most of the jokes were actually at the expense of this main character. So, what were we supposed to do? Blame the bullies or laugh about their вАШawesomeвАЩ jokes? Concerning these jokes, most of them were some running gags involving people throwing stuff at Hubie, Hubie getting scared about pretty much anything and Hubie using his вАШawesomeвАЩ Swiss thermos. Well, none of this was really funny and the fact that it was constantly repeated didnвАЩt help either. Concerning Julie Bowen, she was as usual quite charming and I have to admit that it was fun to see her playing again SandlerвАЩs love interest almost 25 years after 'Happy Gilmore' but it was probably the least likely romance I have seen so far in a Sandler flick. Anyway, to conclude, even if the damned thing was rather harmless, I donвАЩt think it is really worth a look, except maybe if you are a die-hard fan of Adam SandlerвАЩs work.