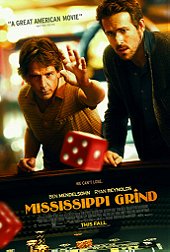 I wasn’t really sure what to expect from this flick but since I always had a weak spot for movies dealing with gambling, especially poker, I thought I might as well check it out. First of all, making a poker movie with Ryan Reynolds was just a brilliant idea. Well, eventually, Reynolds didn’t do much poker, in fact, this movie was even not really about gambling after all. Indeed, it was above all about these 2 men and their relationship. Concerning Ben Mendelsohn, he was basically playing another gambling degenerate but there was some kind of sweetness about this guy and the fact that he was completely aware of his affliction made it easier to root for me. Ryan Reynolds’s character was quite harder to understand though. I guess he was some kind of drifter who, somehow, always managed to get enough money and pretty girls without too much effort but there were still some massive gaps regarding this guy. Indeed, what did he see in Gerry? Was it really realistic that he stuck for so long with him in spite the fact that the guy was pretty much a walking disaster and a ticking bomb combined? As a result, the fact that the guy remained such an enigma made him equally interesting but also frustrating. To be honest, it felt as if the writers got stuck at some point and pretty much stopped working on the script. At least, I did appreciate the fact that they tried a different approach, a different take, on the whole gambling addiction thing. Anyway, to conclude, in spite of its flaws, it was still a decent watch and I think it is worth a look, especially if you like the genre.