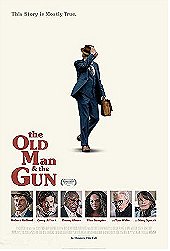 To be honest, I had actually no idea what this movie was about but since I have a weak spot for Robert Redford and since it might be his last leading part, I thought I might as well check it out. Well, even if it was maybe nothing really original, it was still a really entertaining story. In fact, you can imagine that David Lowery could have tried to deliver something more similar to 'Catch Me If You Can' but he chose a completely different approach. It was maybe less showy than Spielberg's movie but the end-result was still quite interesting. Indeed, instead of delivering something fancy with some intricate shots and action scenes, there was such a laid-back mood which might be the last thing you would expect from a movie dealing with bank robbers. Above all, this approach was a perfect match for Robert Redford's acting skills and charisma. Indeed, while some other older actors like Robert De Niro spend their time making some cheap direct-to-VOD crap or some others like Liam Neeson are constantly remaking the same action flick over and over again, Redford managed to find something to end up his career with dignity without completely disrespecting his legacy. Still, even if I did like the approach they took, there was barely any character development though and the biggest victim was probably Casey Affleck's character. In fact, Affleck did deliver another solid performance but it was actually rather difficult to get what was the motivation for this guy. I mean, did he really like his job or was he completely bored? Did he really want to catch Forrest Tucker or did he really admire him too much for that? That was probably the main issue with this movie, the fact that nothing really mattered except allowing Redford to do his thing which he did with, I have to admit it, so much swagger. Anyway, to conclude, even if it was nothing really ground-breaking, it was still a decent watch and it is worth a look, especially if you are interested to see Robert Redford's swan song.