The Devil All the Time review
23 Views
0 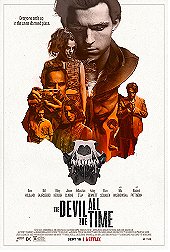 I wasn’t really sure what to expect from this flick but since there was a decent cast involved and since it was available on Netflix, I thought I might as well check it out. Well, even if the damned thing was not bad, to be honest, I can’t say I was really impressed though. I mean, sure, the cast was nice (Tom Holland, Robert Pattinson, Haley Bennett, Bill Skarsgård, Mia Wasikowska, Sebastian Stan, Jason Clarke) and it was pretty neat to see them all playing against type but the story, or stories should I say, never really grabbed me. It is actually rather difficult to really pinpoint what they went wrong with this movie. Was it the rather dreary gloomy mood or the fact that it was rather long and slow? I guess, the main issue was the fact, since there were so many characters involved, none of them was actually really developed after all. Seriously, some of them had maybe 5 mins of screen time. To make things worse, these characters were all described as being either evil, ignorant or hopeless or any combination of these 3 ‘qualities’. As a result, it was rather difficult to care for any of them. In fact, I counted that no less than 12 characters died seriously violently (Charlotte Russell might be an exception though since she did die of cancer) and, as a matter of fact, Tom Holland  was the only speaking character who actually did survive. However, since you never get the opportunity to really invest yourself in any of them, these deaths didn’t have much impact after all. Anyway, to conclude, in spite of its flaws, it was still a decent watch and it is worth a look, especially if you like the genre.