Streep was as solid as iron but the film was not. 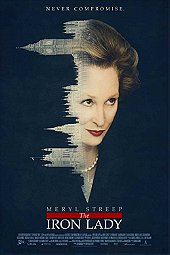 The most important thing to understand about The Iron Lady before watching it is that it’s not aiming to only appeal to those part of the Conservative Party that Margaret Thatcher led for so many years, and nor does one have to like her to get full enjoyment out of this film. Meryl Streep chosen for the role of Thatcher is literally like fate meets the eye as one of the most powerful film actresses in history portrays one of the most powerful women in history. Considering that The Iron Lady does have its fair share of flaws and could have been a masterpiece, Streep’s breath-taking performance as Margaret Thatcher saves the film and is another one of her most memorable and treasured performances.


The most surprising yet biggest controversial flaw that The Iron Lady suffers from that it’s not only a bio-pic but there were numerous scenes particularly in the scenes with elderly Thatcher, that there were aspects of psychological-drama that frequently consisted of on-running gags and occasionally dark scenes. Plus, having to mix in However, the positives within those components are that it added a slight more emotional attachment and realism to Thatcher’s character and her current situations in her life. The Iron Lady perhaps would have been a stronger film if it just included the story of young Margaret and PM Margaret and the fact that it was mixed in three different stories at the same time with the approximate 105-minute duration made the film as a whole feel rather rushed and incomplete.


Phyllida Lloyd, the lady behind beautiful musical Mamma Mia! ironically starring Meryl Streep, makes only her second feature film thus far and collaborates with Streep once more with a more serious story with up-close and personal aspects to it. The biggest problem with Lloyd’s direction within this one was that although the art direction and costume design were spectacular, there is something that is a tad too glistening and colourful which has been the largest fault for many historical motion pictures over the years. Plus, there were the occasional humourous segments that were rather unnecessary and were more or less like on-running but totally unexpected gags that are thrown in rather than adding jokes that are appealing to make the audience feel somewhat humoured and lively entertained by it.


Meryl Streep has been an Oscar goldmine in the majority of her films throughout her career following 17 Academy Award nominations with only 2 wins, but her performance as Margaret Thatcher is beyond belief as she brings forth not only Thatcher’s featured characteristics in terms of physical appearance but manages to portray her posh British accent very accurately and her mannerisms and general attitude to peers around her! Streep’s role as Thatcher almost precisely resembles the breath-taking Academy Award winning performance from Helen Mirren in her role as Queen Elizabeth II in The Queen. So, with this very strong positive aspect that the film bestows, The Iron Lady is a film that has been miraculously saved from major disappointment that could walk away with an Oscar.


Jim Broadbent has been in some of Britain’s most favoured films over the years, including an Academy Award win in Iris back in 2001, but although he looked fantastic as Sir Denis Thatcher, alongside Meryl Streep as the Iron Lady, there was something about him that wasn’t entirely appealing. For example, within the subplot about Thatcher’s older life after Denis had passed, Broadbent was more of a less-serious character than somebody seeking to aid his wife in moving on with her life. So, in that sense, one could say that he was a bit of a sadist. Other vital cast members Anthony Head, Olivia Colman, Richard E. Grant, Alexandra Roach and Harry Lloyd all deliver fine performances in their respective roles too.


Overall, The Iron Lady is one of those films that is enjoyable to watch but unfortunately could have been something truly great in so many other aspects that we didn’t really witness. You will have already seen better bio-pics in the past but at the same time, the same could be said oppositely as there are other ones out there that are even worse. As already stated, you don’t need to be a fond lover of the Conservative Party or Margaret Thatcher to appreciate The Iron Lady but Meryl Streep’s performance is mesmerizing and it has given her yet another solid opportunity for her to receive a third but long overdue third Academy Award win.