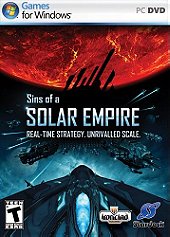 Sins of a Solar Empire (SOASE from now on, I'm tired of typing ^____^ ) is a realtime space RTS, in which you take command of one of 3 races. Spanning up to hundreds of planets, each skirmish can take anything from 30 minutes to several hours. The gameplay is great, with graphics to match, and is supported by multiplayer combat superbly. Fleet battles steadily grow throughout the game, beginning with low level skirmishes, and ending up in massive fleet clashes, as your logistics level increases.

The game is easy enough to pick up on, but the best players can balance their economies and militaries perfectly, adapting to the enemy's tactics and keeping the war effort going. However, players can also persue a more diplomatic role for the start of a game, beginning proxy wars by funding NPC pirate factions and forming alliances and counter-alliances with other players. If it's a space RTS you're after, this is the one to play: fast paced and fun, it's a great buy