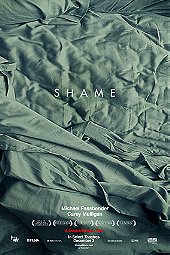 Stunningly shot film with phenomenal performances by all involved, Shame is further proof that former artist, Steve McQueen, has complete mastery over the cinematic form.

Michael Fassbender gives the performance of his life (which is really saying something given his career to date) as the sexually addicted and emotionally detached Brandon, living day to day as best he can in New York. The opening scenes give a painful insight into how Brandon has built routine around his addiction, moving from one sexual encounter to the next, his entire life is consumed by it. He cannot sit on the subway, be at work or go out with friends without looking for his next fix. Considering how little dialogue Fassbender has in the film, his face and body portray every subtle nuance you can read to perfectly understand his character and his thoughts. It's such a powerful performance. From the scene where Brandon quietly cries as his sister sings, to his final emotional breakdown, you feel his pain, anguish, and despair throughout.

Carey Mulligan as Sissy, his sister, who barges into his delicately ordered life is also fantastic. She is wild, emotional, a complete mess and causes Brandon's carefully maintained schedule to collapse around him.
Although not as finely tuned as Fassbender's performance, Mulligan is fiercely effective and the scenes between the two siblings are fraught with intensity and feeling.

Steve McQueen doesn't attempt to give the film a happy ending; far from it in fact. The final scene fills you with dread as you realise that Brandon may not have beaten his addiction after all.

I certainly cannot wait for McQueen and Fassbender's next project together!